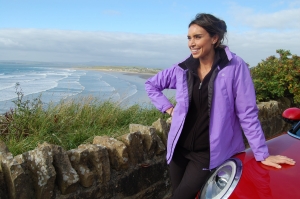 Christine Bleakley, ITV television presenter and fiancée of soccer star Frank Lampard, pictured here outside of Smugglers Creek Inn, was filming a new six-part TV series on the Wild Atlantic Way in Rossnowlagh, on Monday 1st September, the new program will be broadcast on ITV in spring 2015.

The Co Down celebrity said: “It’s brilliant to be here in Ireland filming for this great new ITV series. Growing up, we always enjoyed holidaying in Donegal and Galway and drives along the stunning Atlantic coast – so, this is a dream job for me.”

The series is a new initiative by Tourism Ireland and it is set to help bring thousands of extra tourists here next year. Filming for the new TV series is under way right now; it will highlight the spectacular Wild Atlantic Way to millions of viewers – or potential holidaymakers – across Britain.

Mark and Ian Rush from Smugglers Creek Inn were among the group of surfers that were filmed at Rossnowlagh beach by the production team last Monday. Look out for them next spring!